The morning sun, having saffronised the dreaming spires, heralded what was to be a perfect summer’s day. All the Quinn’s men were scrubbing themselves up in hope of making Quinn and shire proud. A few hundred miles away, the prodigal hobbit was awakening to the bells of the Duomo in medieval Florence oblivious to the trials, and tribulations, that awaited his fellow pack members.

Back in the shire, Marc sounded the bugle by emptying his entire French vocabulary into the first message of the day right after his first sip of morning coffee (French press was it?). Just in time as well. The singleton wolves (you know who you are) in the midst of Saturday morning rituals involving a limb and an unused ‘pen’, were well warned not to spend the last vestiges of their stamina unwisely after yet another failed Friday night campaign ending in solitary confinement.

And then began the cornucopia of confusion, kicked off by Hash’s ‘what time is the game today’. There is always one. The next item on the agenda was the lifts from Potter. If only he collected a pound for every time he offered a ride, a certain book merchant in Hinksey might be led to believe he was in the wrong profession. Potter’s route planning done, it was time for Skipper Tim to confirm his taxi service was also on schedule. Chairman Crouchy, having deftly manoeuvred himself into the poultry pen in doggy-style that would put Stormy Daniels to shame, found himself stuck on the way out.

While the ladies in the Crouch household were busy liberating the chickens from Crouchy’s intrusions, he announced the first delayed arrival of the day. Did we hear him say something about ‘basic stuff’ just a few days ago??….. tsk, tsk.

In the meanwhile, the hobbit, having downed his ninth espresso, put on his garb of being the most serious buyer of high art in Florence and proceeded to sample Crouchy’s recommendations. First

stop, the Galleria Faustini where he was almost charmed by Anita, a most beautiful Texan-Italian, into buying a series of works by a wannabe Dali.

Lunch date secured (largely thanks to a promise of purchase) next it was onto Crouchy’s comrades in con, the Romanos, who exposed how medieval art (and parchments) were picked up in long forgotten basements for pennies to the pounds and then marked up in the name of the forgotten ‘old master’. The shady dealings of Crouchy’s world notwithstanding, the art was fantastic and the passion with which the Romanos shared their learnings was fascinating (they own half the street!).

Just as the hobbit was almost convincing himself that he was indeed a serious collector, the scoreboard was announced – the seconds were 89/3 off 12. Of course a run-rate like that could only have been possible if Roliver had seen Judith (she of the dirndl at the Oktoberfest) in the crowd, or if he had succeeded in snaring JVS away from the firsts. Turns out it was the latter and he had already cracked a 50. This was swiftly followed by a more ominous looking 32/4 for the thirds. At least someone was upholding traditions and ensuring one top order collapse on a Saturday. The chairman had done his bit by announcing his candidature for the duck cup (yet again). Not one to miss an opportunity, Phil Lohan promptly sent out a shout for a spot in the top order (Walshy do take note).

Just as the primi piatti of homemade ribollita was being served at Trattoria Cibrèo (the second of Crouchy’s fantastic recommendations – any more and he might as well charge a fee) the second’s had motored on to 163/4 in 30 and the ever reliable Irfan had given the third’s a semblance of dignity with a well composed half-century. Before Agarwal would get halfway through his Tuscan soup, second’s were up to 195 in 35. JVS must have tormented the opposition for his 86 where as the younger Wildman was picking up where big bro had left off and was well on his way to get into the batting honour’s list. In all this time the first’s had maintained absolute radio silence which did not bode well at all (Toby is never one to remain in his whatsapp ‘Shell’(ey) in fair weather).

Procter took it upon himself to break the bad news that the firsts might be in a spot of bother at 74/7 although he did his best to cast enough doubt on his announcement so as not to dampen the spirits of the other wolf battalions. That message might have had the potential of ruining the secondi of rooster ‘libranese’ but the hobbit was far too immersed in his lunch date to feel any guilt of having abandoned ship. 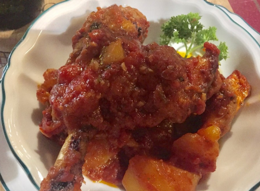 The scores were in – The twos had claimed the batting honours and posted a mammoth 275 with Wildman having secured his name in Wolvercote history, JVS having bossed the bowlers and Nick having provided tail end heroics. The firsts and the thirds were in a more perilous situation. The great Maratha (Amit) and Gus(to) had managed to salvage some pride by wagging the wolf tail for the firsts towards a score (147) that just fell short of respectability whereas Quinny’s nurdles (I believe his qurdles are now retired) provided a poor supporting act to Irfan’s heroics. The thirds had finished on 139. But then again, how can one be bothered with the trivialities of 33 men chasing a red leather ball when one is ‘dolcifying’ in divine caramel panacotta?

Procter, having submitted to the crack of the proverbial whip (not for the first time since his nuptials) sent the only news of the second innings – Oxenford were 35/1 in 15. It was so unemotional in tone that it was almost unhelpful and revealed little about the ground reality.

Just as the BA2056 was departing Peretola Aeroporto, the first of the results was announced. The second’s had expectedly won by a thumping margin. Marc (he of the two word French vocabulary) resurfaced to lead the kudos just as he had earlier in the morning to lead the encouragement. Then it was back to his routine quotidienne. Somewhere in the Plough, a new keg of Brakspear was being rolled out in anticipation that at least some bob would be exchanged for beer. Almost surprisingly, news flowed in that the thirds had registered a comfortable 55 run victory, making Irfan’s gallantry (and Walshy’s lack of) with the willow almost redundant.

Just as the first of the hunting party were trickling into the plough, and the hobbit had crossed the channel into Old Blighty, the final bit of the jigsaw was complete. The firsts had completed a remarkable treble of victories, only the second ever in history. Amit, and the Shafqat brothers in combination with excellent work Gusto behind the stumps had undone Oxenford and led us to victory by 10 runs. It’s not often the older Shafqat outshines his more illustrious younger sibling with the ball, but his line and length had clearly mesmerised the visitors. Fortress Cutteslowe remained intact.

The social sec promptly realised that adequate arrangements needed to be made.

Tring..Tringg…. Hello Plough?… This is Potter here… No not the potter in Jericho you dimwit…. yes the one who ensures you survive the winter because I bring in the punters in the summer….. yes that one…. Right, I’d like to request two kegs, actually make that three kegs of Brakspear…. Not possible? Call the brewery if you have to…. Don’t be difficult man… so where we? Yes three kegs of Brakspear, one each of Doombar and Wainwright, three dozen of your finest ale, half a dozen pints of something non-alcoholic and and a dozen pints of Perroni top…. yes you heard that right…. Sorry, cancel the Perroni top, Ben Procter is on the leash…..And please clear out six tables outside, the wolfpack is arriving….. what? The perverts from Pamplona??!!!…. Good heaven’s man, what are you on about…. Please stop with your reading of the news and focus on the laying out the proverbial red carpet for King Quinn and his merry men…. And yes, we’ll be spending big…. Of course of days like this my cut will be double our usual…. Splendid. And don’t you worry, I’ll make sure even Pinhol empties his wallet tonight. Jolly good. Cheerio.”

And you know it’s been a good day when even Pinhol is inspired to buy a round. Sam Payne (still overdrawing from the bank of mum and dad) had alerted the entire pack to the fact that Pinhol had been spotted at the bar with an open wallet. Nick is already plotting his revenge for the day when master Payne comes off age and buys his first round…. I suppose the queue for that one might stretch out around the block! 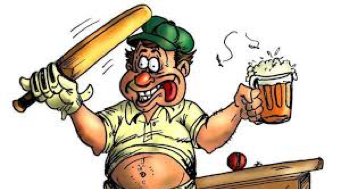 An unbeaten pack over five games, a new member into the batting honours, another memorable treble, topped off by dinner at Zheng (now there is a restaurant that rivals any in all of Tuscany).

As the sun set over the shire spreading a crimson glow, a satisfactory smile spread across the hobbit’s face. On his way back from medieval excesses, he revelled in the warmth of the knowledge that the pack was going strong. And while he may be physically removed from the shire, in spirit he could not have felt closer. If Boulle were to possess an extended vocabulary, he might have said… C’était une journée magnifique! And I’m sure we’d all agree.